You can listen to the audio lesson here.

You can also find the “Working Definition of Evangelism” here.

Having established that the Great Commission is the driving motivation behind our evangelism, the church are the messengers, and the unregenerate are the recipients, and having discussed God’s holiness and man’s sin and its wages as the backdrop to the gospel, today we finally arrive at the gospel itself. We have just spent two lessons describing man’s terrible predicament. Now, we will discuss God’s great remedy. In the next three lessons, we will observe Christ’s accomplishment of redemption through His perfect obedience.

Is Calvinism the gospel? One famous preacher is often quoted as having said that Calvinism is the gospel. I have even been out doing door-to-door visits before with individuals who insisted on bringing up the five points of Calvinism in their gospel presentations. While it is certainly helpful in one’s evangelism to know and affirm the doctrines the doctrines of grace, conveying them in an initial evangelistic encounter is not always wise. Besides, our goal in evangelism is to make disciples, not Calvinists.

This is not to say that there aren’t some elements of the doctrines of grace that are essential to explaining the gospel. For instance, we certainly want the unbeliever to understand his or her depravity and the fact that Christ provided an atonement for His sheep. Discussions about election, the irresistible call, and the perseverance of the saints can come later in the process of discipleship. How redemption is applied to the individual may be necessary to discuss at a certain point in the discussion, but the main thrust of the gospel message in evangelism should focus primarily on how Christ accomplished our redemption.

Redemption and atonement. First, we must ask, “What is redemption?” The term redemption stems from the biblical concept of being bought back. When a man sold himself into slavery in order to pay off a debt, in the Old Testament, a kinsman redeemer could come and purchase him back and restore him to freedom and to his land (Lev. 25:47-50, 25). In the same way, we are told that the unbeliever is enslaved to sin and in need of a Redeemer.

“16Do you not know that to whom you present yourselves slaves to obey, you are that one’s slaves whom you obey, whether of sin leading to death, or of obedience leading to righteousness? 17But God be thanked that though you were slaves of sin, yet you obeyed from the heart that form of doctrine to which you were delivered. 18And having been set free from sin, you became slaves of righteousness,” (Romans 6:16-18; NKJV).

As slaves to sin, we must have a Redeemer if we hope to be free. John Murray wrote at length about the doctrine of redemption in his book Redemption Accomplished and Applied. Again, it is this accomplishment of redemption that should be our primary focus in our evangelistic discussions. Murray explains in the opening sentence of his book, “The accomplishment of redemption is concerned with what has been generally called the atonement,” (John Murray, Redemption Accomplished and Applied, pg. 9).

Second, then, we must ask, “What is atonement?” Atonement is observed in the historic acts of Christ in which He “by His perfect obedience and sacrifice of Himself, which He through the eternal Spirit once offered up to God, has fully satisfied the justice of God, procured reconciliation, and purchased an everlasting inheritance in the kingdom of heaven for all those whom the Father has given unto Him,” (The Baptist Confession, 8.5). For our study, we will observe three specific elements of Christ’s work of redemption: His obedience in life, His obedience in death, and His resurrection.

Christ’s obedience in life. In understanding the necessity for Christ’s obedience, we must begin by understanding that we are disobedient. Each of us have the work of God’s law written on our hearts (Rom. 2:14-16) such that none of us are excused in our violation of it (Rom. 1:18-21). None of us will be able to stand in the day of judgment in our own deeds, for “If You, LORD, should mark iniquities, O Lord, who could stand?” (Ps. 130:3; NASB). In ourselves, then, we are deemed to be the pupils of Satan, sons of disobedience, and children of wrath.

“1And you He made alive, who were dead in trespasses and sins, 2in which you once walked according to the course of this world, according to the prince of the power of the air, the spirit who now works in the sons of disobedience, 3among whom also we all once conducted ourselves in the lusts of our flesh, fulfilling the desires of the flesh and of the mind, and were by nature children of wrath, just as the others.,” (Eph. 2:1-3; NKJV).

However, from the initial sin of Adam, God has been about the work of redemption. From the beginning, He provided for His people the hope of a coming Messiah, one who would make atonement for their sins and reconcile them to God. We know that the many prophesies of this Messiah to come were finally and fully fulfilled in the Person of Christ Jesus. As a result, all who turn from their sins toward God and place their full trust and allegiance in Christ are now considered sons of God, obedient children (1Pt. 1:14).

This transaction required the full and perfect obedience of Christ. The reason Christ needed to live a perfect life is twofold. First, Christ needed to go through all of the trial, temptation, and hardship He did in order to prepare Him for the single voluntary act of dying on the cross for our sins. We’ll explore in more depth the doctrine of the cross next week. Second, Christ had to fulfill on behalf all His sheep the perfect law of God.

“He perfectly met both the penal and the preceptive requirements of God’s law. The passive obedience refers to the former and the active obedience to the latter. Christ’s obedience was vicarious in the bearing of the full judgment of God upon sin, and it was vicarious in the full discharge of the demands of righteousness. His obedience becomes the ground of the remission of sin and of actual justification,” (John Murray, Redemption Accomplished and Applied, pg. 22).

Christ then is not only our perfect Sacrifice, as we will see next week. He is also our perfect obedience to the law. He provides atonement for the sins we have committed, to be sure, but He has done far better. When we turn to Christ, we not only receive a clean slate and new standing with God. We receive Christ’s goodness and perfection and all the blessing and privilege that comes with it. In Him, we not only have the infinite debt of our sin expunged, but we have accredited to our account an infinite sum, an eternal inheritance!

It is imperative that we Christians deeply and regularly consider these truths. In doing so, our evangelism becomes second nature. The truth of the gospel and the joy that accompanies it will readily and bountifully spring from our hearts and through our lips as streams well up and flow from deep within the mountains. Let us not take in this knowledge as a purely academic exercise, for that would be contrary to Scripture. It would also lead to the sure death of our evangelism. Rather, we must take these truths and drive them deep into our souls to be regularly meditated upon and regularly discussed as we commune with the saints.

“7who, in the days of His flesh, when He had offered up prayers and supplications, with vehement cries and tears to Him who was able to save Him from death, and was heard because of His godly fear, 8though He was a Son, yet He learned obedience by the things which He suffered. 9And having been perfected, He became the author of eternal salvation to all who obey Him, 10called by God as High Priest ‘according to the order of Melchizedek,’” (Hebrews 5:7-10; NKJV).

My husband and I welcomed a new baby girl into our family in February. And we have been experiencing the highs and lows of having a newborn since then. In addition, dealing with the inevitable sibling jealousy and regression in behavior from our oldest has led both of us to our knees many many times this year, and it has caused me to reflect a lot on our family, my own family, and the family of God.

Presently, I am reading through J. I. Packer’s wonderful book Knowing God. (I can’t begin to tell you how great this book is, and I wholeheartedly encourage you to read it if you have not.) And 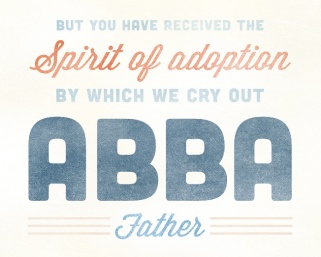 he has a great chapter on the topic of adoption, or being sons of God. Without a doubt, we know that once we have been born again, we become members of the household of God, and we see this clearly expressed in church membership and our fellowship with other brothers and sisters in the faith. But what of God? How is calling Him, Father, changing us? How has it changed our lives, our perspective on things in this life? Is it changing anything? Are we thinking about long enough for it to make a difference?

Let me share one final thought from Packer’s book that’s worth thinking about:

One more thing must be added to show how great is the blessing of adoption – namely, this: it is a blessing that abides… The depressions, randomnesses, and immaturities that mark the children of broken homes are known to us all. But things are not like that in God’s family. There you have absolute stability and security; the parent is entirely wise and good, and the child’s position is permanently assured. The very concept of adoption is itself a proof and guarantee of the preservation of the saints, for only bad fathers throw their children out of the family, even under provocation; and God is not a bad father, but a good one. When one sees depression, randomness and immaturity in Christians one cannot but wonder whether they have learned the health-giving habit of dwelling on the abiding security of true children of God.