It’s the most wonderful time of the year! Or is it?

The Facebook page “Boycott Shopping on Thanksgiving Day” has 10,000 likes.  Apparently, if you shop on Thanksgiving, you are forcing people to have to work and needlessly keeping them from their families. The right thing to do, according to the page, is to rest on that day, focus on giving thanks for what you have, and don’t frequent stores that offer unnecessary services. If I step into CVS for some of their ECB deals Thanksgiving night, am I a cruel, heartless being?

When Thanksgiving appears, Christmas isn’t too far behind. I have not watched “Kirk Cameron’s Saving Christmas“, but I did read the discussion guide here. Part of Question 7 states,

Our children need to taste and see and hear that we are children of this King. Our traditions are one of the primary ways that this amazing reality is communicated from generation to generation. Embrace all of the gift giving, the advent calendars, the Christmas Eve dinners, and everything else that communicates that ‘The Earth is the Lord’s, and all it contains’ in concrete and embodied ways.”

Blogs and discussion groups abound with ideas on what to do for Advent, claiming that by doing these things I will create meaningful memories for my children. If I don’t fill my kids with sugar and deck them halls with red, green, silver or blue, have I deprived my children forever?

Is there something wrong with you if you don’t follow tradition?

Growing up Roman Catholic, my family knew how to celebrate in the winter months. The advent wreath was brought out and the candles lit every evening at supper whilst we sang “O Come, O Come, Emmanuel.” Stockings were hung on the stairway on December 5th, as St. Nicholas would come the next day bringing some toys, an ornament, tangerines and walnuts. The next week we trekked to the Christmas tree farm to pick out the tree and lug it home. While it was being decorated, other Christmas ornaments were hung on red velvet ribbons tacked to the top of the bow window, and a nativity (or two) would be arranged. A few presents would be placed under the tree at Christmas Eve, and all would be allowed to open one. The next morning, more presents would appear under the tree from Santa Claus. We would open some, pause and go to Mass, then come back to finish reveling in what we received. Twelve days later was the feast of the epiphany, or Three Kings’ Day.  Whoever bit into the walnut hidden in a cupcake was crowned that year’s king.

Later when I became a Christian, married, and had children of my own, the traditions of my youth hovered before me like the ghost of Christmas past. What traditions should I keep? How was I going to ensure my kids had a Christmas full of wonder and magic? When could I get everyone still enough for a photo for the cards? Wouldn’t I be Puritanical if I didn’t celebrate the season?

If this time of year brings an undue amount of pressure for you, here is a sanity-saving tip that I have come to know: if a holiday event brings you stress and pressure, then don’t do it.

Let me repeat: if a holiday event brings you stress and pressure, then don’t do it!

It is truly that simple. Breaking the trappings of tradition can be difficult, but once done, the freedom is thrilling. The doctrine of Christian liberty is such a precious doctrine to study. Usually we hear it summoned as a defense for various holiday celebrations. Yet let’s remember that it also offers freedom from holiday celebrations.

So if you want to exercise good stewardship on Thanksgiving by shopping, do so without guilt. Christmas presents do not have to be around a tree, it may be advantageous to avoid mentioning Advent, and children are able to wonder at the Incarnation without a nativity. (Besides how nativities violate the 2nd Commandment, but that’s a post for another day.) Most Puritan children probably grew up just fine without even celebrating Christmas.

In our family, we might decorate a tree this season; we haven’t done it every year. My children enjoy receiving presents, but they will be the first to tell you Santa Claus is not real. And if I get to it, we’ll send a newsletter to friends and family. It’s not a big deal. After all, traditions come and go, but the Word of the Lord lasts forever.

For a thorough treatment exploring Christian liberty and the Christmas issue, listen to Al Martin’s series on Christian Liberty and Christmas. 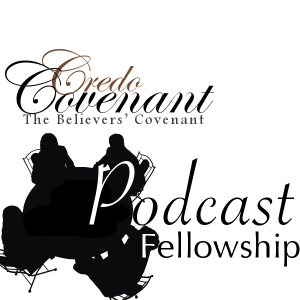 Grab your copy of The Baptist Confession and join JD and Billy as they discuss Christian liberty from a Reformed Baptist perspective.

Subscribe to future podcasts and leave us a review on iTunes: RSS | iTunes

The book we mentioned:

We’d love your participation. Contact us with your comments and questions about the confession’s contents: