Dealing with the Sense of Inferiority

As I mentioned before, egalitarians could also be using this emphasis on public recognition in Application #2 to address a different issue: the sense of inferiority that some women have for being females. Now, I do think that this is a serious problem for some women, and let’s consider the Danvers Statement again to see if complementarians have addressed this, especially Affirmations #1, 2, 5, and 6.

Looking at these affirmations from the Danvers Statement, it is safe to conclude that complementarians do believe that women are 1) created in God’s image, 2) equal before God as persons, 3) distinct in their womanhood and 4) of equal high value and dignity as men. Moreover, complementarians do acknowledge that there were serious distortions introduced by the Fall that redemption in Christ aims to remove. In case of any confusion, the Danvers Statement defines the distortions in Affirmation #4.

The Fall introduced distortions into the relationships between men and women.

-In the church, sin inclines men toward a worldly love of power or an abdication of spiritual responsibility, and inclines women to resist limitations on their roles or to neglect the use of their gifts in appropriate ministries.

It is these distortions that complementarians believe that redemption in Christ aims to address and remove, and this work is prayerfully going forth in the Church. Now, I do understand that there are still some complementarians who believe that the ideal Christian wife is the ‘doormat’ type who just looks cute, says nothing, and does whatever she is told. Personally, I would not call those people complementarians at all, but there are some who claim the title for themselves. And it may be that people who hold these views are promoting a sense of ‘inferiority’ among women, but I would at least like to set the record straight that Biblically-sound complementarians do NOT believe that women are inferior in the least bit. They recognize that women serve different God-ordained functions, but a difference in function does not mean that a woman is different in value, especially before God. And they also recognize and appreciate the hard work that their fellow sisters in Christ do for the kingdom of God, whether it is in their own homes, in the church, in the community, or in the world, and encourage them all the more to be faithful and diligent in their labors until that final day. 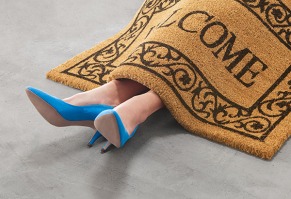 Circling the Wagons back to the Doormat

Before, I end this blog, I feel like it is necessary to come back to this sense of inferiority that women oftentimes feel. To speak frankly, I’ve often wrestled with feeling inferior as a married woman. No, my husband never told me anything crazy to make me feel that way, but I began to wrestle with those feelings once I left my job and found myself at home with a newborn and nothing to do any more. Then, once I began to experience small moments of joy doing some housekeeping tasks or assisting in a church ministry, I got hit again with ‘You had so much potential. You’re just wasting it being at home like this. Surely the Lord wouldn’t want you to waste your education, skills, and talent to just be at home.’ After having those words marinate in my mind for a while, I became despondent and depressed all over again and found myself struggling with my own sense of worth.

At this point in my life, almost 3 full years of being at home, I have come to recognize that we are fighting a war, dear sisters, and it behooves us not to forget that. We are fighting a spiritual war, and we have a formidable foe that is extremely clever and employs many schemes intended to ultimately cause us to fall away from the faith. 2 Corinthians 10:3-5 tells us:

For though we walk in the flesh, we are not waging war according to the flesh. For the weapons of our warfare are not of the flesh but have divine power to destroy strongholds. We destroy arguments and every lofty opinion raised against the knowledge of God, and take every thought captive to obey Christ

This verse tells us that a good deal of our spiritual battle will be fought against thoughts, opinions, and arguments that go against the knowledge of God, the same knowledge we find in the Word of God. Dear sisters (and brothers), Satan will twist the Word of God any way he can to cause us to not understand it properly, to focus on the wrong things, and to ultimately get so frustrated with it, that we walk away from it, and away from God. Consider this passage from Spiritual Warfare: A Biblical and Balanced Perspective by Brian Borgman and Rob Ventura:

Satan can try to persuade us to misapply and misunderstand the Word, and so inoculate people against its proper meaning…The devil twists the Word of God in innumerable ways, and he does this ultimately to get people to reject it. If he can get people to reject the Word outright, he has then made an effective attack on God. But, more often, he twists the Scripture so that God’s character is maligned, the person and work of Christ are distorted, God’s grace is perverted, and man’s sin is misrepresented. Satan also tries to disfigure the Word through false doctrine…Satan’s principal weapon is falsehood…The devil knows how to lie in ways that appeal to our sense of deserving, our sense of worth or lack of worth, and our sense of rights and wrongs. You name it – Satan can lie about it (p. 27-28)

As women, when we’re struggling with those thoughts and feelings of inferiority, not having much value, and uselessness, we must keep in mind that we are fighting a spiritual battle, and we must be clothed with the whole armor of God. We cannot expect to fight and win in these battles with such things like a little public recognition, a few likes on Facebook, a couple of more followers to our blog, and other petty things that merely gloss over the bigger fact that we are at war against thoughts and ideologies that are directly opposed to God.

Now, I do not want to say this to the complete disregard of many who have grossly misunderstood and misapplied the Scripture, causing much harm to many, but every single Christian must realize that we are each called to stand, to “take up the whole armor of God, that you may be able to withstand in the evil day, and having done all, to stand firm” (Ephesians 6:13). Women are not going to be standing in the shadows of men here, and wives will not be behind the shields of their husbands. No woman will ever hear the Lord say that she is too weak to pick up the sword and fight. But we each have to put on our belt of truth, the breastplate of righteousness, readying our feet with the gospel of peace, taking up the shield of faith, the helmet of salvation, the sword of the Spirit (that is, the word of God), and be diligent in prayer. Everyone of us has to do this because we will be engaged in battle until our dying breath. And when we fail to do this, we will succumb to believing lies, being swayed by erroneous arguments, being led astray by clever ideas, and even falling prey to the deceitfulness of our own hearts.

The egalitarian belief that public recognition will help women not feel inferior and help to keep them within the faith and the church is an optimistic idea and approach, but unfortunately, it does not get to the root of the problem. The complementarian belief that it is redemption in Christ that will remove the distortions introduced by the curse after the Fall is the solid bedrock that all Christians, men and women, should be standing on. Our identity must be found in Christ alone. We must heed the exhortation of Paul found in Romans 12:2:

Do not be conformed to this world, but be transformed by the renewal of your mind, that by testing you may discern what is the will of God, what is good and acceptable and perfect.

Complementarians, appealing to the effects of the redemptive work of Christ, recognize that we must all be transformed by the renewal of our minds to remove the distortions of the roles and functions of men and women in the home and in the church. This renewal will continue throughout our Christian lives as we come to study and understand the Word of God more clearly and as the Spirit applies the Word to our lives. As we are continually renewed, we will grow stronger so that we are able to stand firm against the attacks of the enemy and fight in this war, whether it comes through false doctrine or the overwhelming feelings of inferiority and uselessness.

Special Note: Being transformed by the renewal of our minds is accomplished primarily through the hearing, reading, and studying of the Word of God. But we must also believe that the Word of God is literally the Word of God, from God. When we hold views that the entire Bible is not inspired by God, or that people wrote in their own personal views or preferences, or that the whole Bible is not authoritative to the Christian, then the promise that the Spirit of God will renew our minds is null and void. We cannot be equipped for battle nor can we stand firm and be victorious when these attacks come because we will be lacking in our faith because we failed to believe the truth, that is God’s Word. “Therefore do not throw away your confidence, which has a great reward. For you have need of endurance, so that when you have done the will of God you may receive what is promised. For, ‘Yet a little while, and the coming one will come and not delay; but my righteous one shall live by faith, and if he shrinks back, my soul has no pleasure in him.’ But we are not of those who shrink back and are destroyed, but of those who have faith and preserve their souls.” (Hebrews 10:35-39)