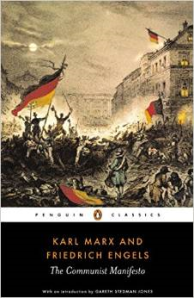 The Communist Manifesto by Karl Marx and Frederick Engels

“Originally published on the eve of the 1848 European revolutions, The Communist Manifesto is a condensed and incisive account of the worldview Marx and Engels developed during their hectic intellectual and political collaboration. Formulating the principles of dialectical materialism, they believed that labor creates wealth, hence capitalism is exploitive and antithetical to freedom.

This new edition includes an extensive introduction by Gareth Stedman Jones, Britain’s leading expert on Marx and Marxism, providing a complete course for students of The Communist Manifesto, and demonstrating not only the historical importance of the text, but also its place in the world today.”

“First published in London in 1848, The Communist Manifesto is one of the most important books of all time: a document which helped to define the emerging socialist movement, altered the course of world history, and is universally acknowledged to be a cornerstone of modern social thought.” read more… 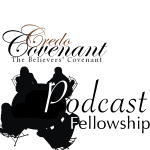 Listen to Our Discussion of This Book

“No philosopher’s reputation has plummeted in my lifetime as dramatically as that of Karl Marx. As late as the 1970s, it was still fashionable to claim an ideology deriving from Marx. Ambitious young politicians like John Reid and Alan Milburn called themselves socialists and even Marxists as comfortably as they later called themselves New Labour.” read more…

“The Communist Manifesto was a product of the social, economic and political turmoil that characterised Europe before 1850. Both of its authors, Marx and Engels, were touched by elements of this turmoil. Karl Marx, born in 1818, came from the Rhineland, an area occupied by the French during the Napoleonic Wars. During this period the French abolished feudal restrictions, introduced religious toleration and secularised the state. Many, like Marx’s father, benefited from this liberal regime. When, after Napoleon’s defeat, the Rhineland passed under Prussian control, Hirschel Marx, Karl’s father, abandoned Judaism for Christianity to retain the right to practise as a lawyer. Friedrich Engels, born in 1820, came from a family of German industrialists: he had, therefore, first-hand knowledge of the effects of rapid industrialisation. In 1842 Engels moved to Manchester to work at the family cotton mill. This took him to the heart of the world’s first industrial nation.” read more…