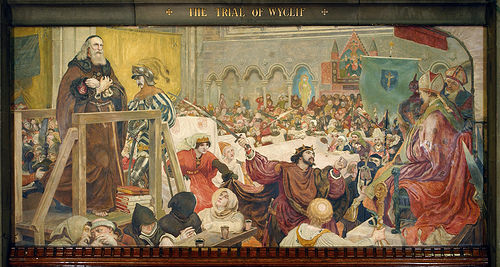 Of The Holy Scriptures

“…therefore they are to be translated into the vulgar language of every Nation, unto which they come…”

Chances are ancient Hebrew and Greek are not your native languages.

So in order to know what Old Testament prophecy says concerning Christ, and to know that the New Testament gives account to how Jesus fulfills those prophecies, you have two choices:

1: become proficient in ancient Hebrew and Koine Greek, or

2: read a translated version of the Scriptures.

Most probably you read a translated version.

We have so many different translations of the Bible nowadays that it seems a no-brainer that the Scriptures should be made available in various languages. Yet this was not always the case. Latin was the only permissible language for Scripture according to the Roman Catholic church during the Middle Ages. When John Wycliffe started a translation of the Bible into the English spoken at the time, it was considered heretical. One Catholic wrote:

And Wyclif, by thus translating the Bible, made it the property of the masses and common to all and more open to the laity, even women who were able to read… And so the pearl of the Gospel is thrown unto swine and trodden underfoot…(emphasis added)

It is important to note that the call of the Confession to translate the Scriptures into the “vulgar language of every Nation” is not calling to debase the Scriptures in any way. The word “vulgar” at that time meant common, rather than carrying the connotation of base and unwholesome speech that it does today. Translating Scripture should make the meaning of the text as clear as possible while striving to lose as little of the literal word-for-word construct as possible. Not an easy task!

Scripture is truly a treasure to be shared among God’s people. We can be thankful for those who have used their gifts to bring it into a language we can understand.